Pemba is the capital of Cabo Delgado province, the northernmost province of Mozambique. It is set on a peninsula overlooking one of the three largest bays in the world. Originally a small fishing village - now the neighbourhood of Paquitequete - Pemba as a comercial centre was founded by the Portuguese at the beginning of the 20th century, when it was known as Porto Amélia. The oldest part of town, the baixa, centred around the port and adjascent to Paquitequete, houses Pemba's oldest and most attractive buildings, though it takes some imagination to see past their current state of disrepair.

The busiest part of town now is set on the hill above the port, and most of the banks, services and shops are on the central Avenida Eduardo Mondlane. Tourism, still in its early stages, is centred on Wimbe beach, some 5km east of town. Here several hotels and restaurants are set on or near the beach, a palm-fringed crescent of white sand. The tropical climate ensures that the water is always warm, and Pemba is best known for its excellent diving, snorkelling and fishing. Other beautiful beaches abound in the areas close to Pemba and further north along the coast, and the Quirimbas Archipelago offers a unique destination within a newly gazetted marine park.

Inland destinations are starting to open up with new roads allowing easier access to several areas currently being developed for tourism. It's well worth making the effort to travel inland, as the scenery can be stunning. Furthermore, Cabo Delgado remains largely undeveloped and untouched and is a great place for experiencing Mozambican culture at its most authentic. Catch it while you can! Apart from its own attractions, Pemba acts as a gateway to Mayotte and the Comores, a mere one hour's scheduled flight away, and Dar es Salaam in Tanzania.

GETTING HERE AND AWAY

Scheduled flights: There are daily flights to Pemba from Maputo (usually with a stopover in Beira or Nampula). There are direct flights to Maputo with LAM from Lisbon, Portugal, and from Johannesburg, South Africa. British Airways, KLM, Gulf Air and United Emirates Air fly to Dar es Salaam, Tanzania, from where there are several flights weekly to Pemba. Several weekly flights also link Pemba and Mayotte, in the Comores. Overland routes to Pemba come through Nampula from the south, Mocimboa da Praia fromTanzania and the north, Mutare border crossing from Zimbabwe, and Milange border crossing from Malawi

Bargaining at markets is to be expected. Bring along a Portuguese phrase book, it can be of great use! 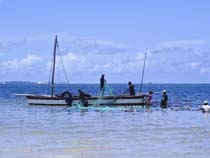 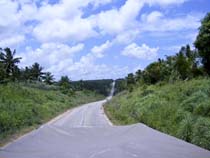 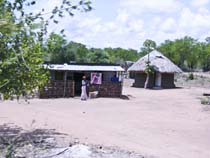