You will surely enjoy spending your vacation in South Africa because of the many beautiful places that you can visit here. This place is perfect for people looking for a relaxing vacation that is far from the hustle and bustle of the city. Read on the following paragraphs below to know the best places to visit when you go here for your holidays.

The Elephant Sanctuary, situated close to Hartbeespoort Dam, 45 minutes from Johannesburg and Pretoria. You encounter with these magnificent animals will deepen your understanding and change forever.

South Africa's commercial heart offers many cultural options including Museum Africa, for a good insight into the country's history. A microcosm of South African culture can be found in the Newtown Cultural Precinct. Nearby is the Market Theatre Precinct that incorporates the Foundation for the Creative Arts and the Newtown Art Gallery. On the city's outskirts is Gold Reef City, the recreation of an old gold-mining town. To the north of Johannesburg is Sandton, a great place for shopping, entertainment and eating out. Nearby is the spectacular Randburg Waterfront, with its lively restaurants, bars and shops.

Now one of South Africa's most popular tourist attractions, much of the recent history of the country arose in this sprawling metropolis to the south west of Johannesburg. The years of political struggle come alive in places like Freedom Square, where the Freedom Charter was declared in 1955, the Regina Mundi Catholic Church, the Hector Peterson Memorial Square and the former homes of Nelson Mandela and Archbishop Tutu. Shebeens (typical African pubs) are well worth visiting. Organized tours are recommended packaged with cheap flights to SA being offered by several travel agencies and online travel sites.

The administrative capital of South Africa is renowned for its historic buildings, exquisite gardens, monuments and museums. The majestic Union Buildings, built in the early 20th century, were the backdrop for the inauguration of Nelson Mandela as South Africa's first democratically elected State President in 1994. Other places of interest include Church Square, Kruger House Museum, the Voortrekker Monument and Museum as well as Melrose House, where the Anglo-Boer War Peace Treaty was signed. Tshwane/Pretoria is nicknamed "Jacaranda City" after the 70,000 mauve-blossomed jacaranda trees that burst into bloom in late-September and October.

This multi-cultural village, set in bushveld less than an hour's drive from Johannesburg, portrays the ways of life of the Basotho, the Ndebele, the Pedi, the Zulu and the Xhosa peoples. Spend the night in typical huts (with modern amenities) tasting typical cuisine and watching traditional dancing, singing and story telling.

Sterkfontein's Cradle of Humankind is one of the world's most productive and important papaeoanthropological sites, boasting some of the greatest discoveries concerning human evolution. Fossil finds at Sterkfontein protected the caves from being mined for their limestone and other mineral content. The ancient cave system revealed a sequence of deposits dating from 1,5 to 3,5 million years ago. In 1936 Robert Broom found the first adult ape-man, nicknamed Mrs Ples. In 1998, an entire australopithecine skull, together with skeleton, was discovered by Ron Clarke in an underground cavern beneath the surface excavations. Owing to its great age and completeness, this is regarded as the most important fossil find in South Africa since the Taung skull {discovered by Raymond Dart in 1924}.

Whatever you call it , you'll love it. There's nowhere else on earth that throbs like Johannesburg. It's a world in one city - First World hi-tech, Third World mystique. A truly African, cosmopolitan city of contrasts. Joburg seethes with life and offers a dizzying array of stuff to do. Get ready for the ride. The de facto capital of Africa has it all: first rate infrastructure, thriving business, vibrant people, culture, museums, galleries, shops, craft markets, restaurants and cafes, leisure spots, casinos, malls ... 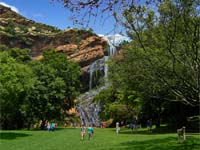 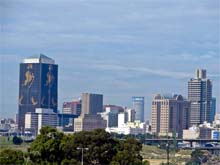 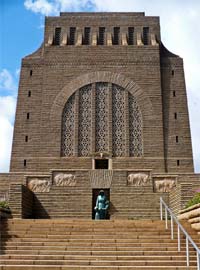 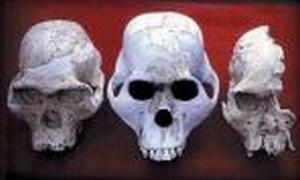